Al-Balagh: Jurnal Dakwah dan Komunikasi (p-ISSN: 2527-5704; e-ISSN: 2527-5682) is a peer-reviewed journal published by Faculty of Ushuluddin and Da'wah UIN Raden Mas Said Surakarta Indonesia that committed to upholding the highest standards of publication ethics and takes all possible measures against publication malpractice. This statement clarifies ethical behavior of all parties involved in the act of publishing an article in this journal, including the author, the principal editor, associate editor, editorial board, reviewer­­­­­ and publisher. This statement is based on COPE’s Best Practice Guidelines for Journal Editors. Our responsibility is to publish original work of value to the intellectual community in the best possible form and to the highest possible standards. We expect similar standards from our reviewers and authors. Honesty, originality, and fair dealing on the part of authors, and fairness, objectivity, and confidentiality on the part of editors and reviewers are among the critical values that enable us to achieve our goal. Al-Balagh: Jurnal Dakwah dan Komunikasi is committed to following best practices on ethical matters, errors, and retractions, and to provide a legal review if necessary.

Publication Decisions
The editors of Al-Balagh: Jurnal Dakwah dan Komunikasi ensure that all submitted manuscripts being considered for publication undergo peer-review by at least two reviewers who are experts in the field. The Principal Editor is responsible for deciding which of the manuscripts submitted to the journal will be published, based on the validation of the work in question, its importance to researchers and readers, the reviewers’ comments, and such legal requirements as are currently in force regarding libel, copyright infringement and plagiarism. The Editor may confer with other editors or reviewers in making this decision.

Fair Play
Editors evaluate submitted manuscripts exclusively on the basis of their academic merit (importance, originality, study’s validity, clarity) and its relevance to the journal’s scope, without regard to the authors’ race, gender, sexual orientation, ethnic origin, citizenship, religious belief, political philosophy or institutional affiliation. Decisions to edit and publish are not determined by the policies of governments or any other agencies outside of the journal itself. The Principal Editor has full authority over the entire editorial content of the journal and the timing of publication of that content.

Confidentiality
The editors and any editorial staff must not disclose any information about a submitted manuscript to anyone other than the corresponding author, reviewers, potential reviewers, other editorial advisers, and the publisher, as appropriate.

Disclosure and conflicts of interest
The Editors will not use unpublished information disclosed in a submitted manuscript for their own research purposes without the authors’ explicit written consent. Privileged information or ideas obtained by editors as a result of handling the manuscript will be kept confidential and not used for their personal advantage. Editors will recuse themselves from considering manuscripts in which they have conflicts of interest resulting from competitive, collaborative, or other relationships/connections with any of the authors, companies or institutions connected to the papers; instead, they will ask another member of the editorial board to handle the manuscript.

Management of unethical behavior (s)
The editors, together with the publisher(s), should take rationally responsive measures when ethical complaints have been presented regarding a submitted manuscript or published article. Every reported act of unethical publishing behavior will be looked into, even if it is discovered years after publication.

Reporting Standards
Authors of original research should present an accurate account of the work performed and the results, followed by an objective discussion of the significance of the work. The manuscript should contain sufficient detail and references to permit others to replicate the work. Review articles should be accurate, objective and comprehensive, while editorial ‘opinion’ or perspective pieces should be clearly identified as such. Fraudulent or knowingly inaccurate statements constitute unethical behavior and are unacceptable.

Originality and plagiarism
The authors should ensure that they have written entirely original works, and if the authors have used the work and/or words of others, that this has been appropriately cited or quoted. Plagiarism takes many forms, from 'passing off' another's paper as the author's own paper, to copying or paraphrasing substantial parts of another's paper (without attribution), to claiming results from research conducted by others. Plagiarism in all its forms constitutes unethical publishing behavior and is unacceptable. We will check each manuscript using a plagiarism checker to ensure the originality of the article. Furthermore, each submitted article should be accompanied by a letter of statement from the author(s) stating that the article is free from plagiarism.

Multiple, redundant or concurrent publication
Papers describing essentially the same research should not be published in more than one journal or primary publication. Hence, authors should not submit for consideration a manuscript that has already been published in another journal. Submission of a manuscript concurrently to more than one journal is unethical publishing behavior and unacceptable.

Acknowledgment of sources
Authors should ensure that they have properly acknowledged the work of others, and should also cite publications that have been influential in determining the nature of the reported work. Information obtained privately (from the conversation, correspondence or discussion with third parties) must not be used or reported without explicit, written permission from the source. Authors should not use information obtained in the course of providing confidential services, such as refereeing manuscripts or grant applications unless they have obtained the explicit written permission of the author(s) of the work involved in these services.

Authorship of the paper
Authorship should be limited to those who have made a significant contribution to the conception, design, execution, or interpretation of the reported study. All those who have made significant contributions should be listed as co-authors. Where there are others who have participated in certain substantive aspects of the research project, they should be acknowledged or listed as contributors. The corresponding author should ensure that all co-authors have seen and approved the final version of the paper and have agreed to its submission for publication.

Fundamental errors in published works
When an author discovers a significant error or inaccuracy in his/her own published work, it is the author's obligation to promptly notify the journal editor or publisher and cooperate with the editor to retract or correct the paper. If the editor or the publisher learns from a third party that a published work contains a significant error, it is the obligation of the author to promptly retract or correct the paper or provide evidence to the editor of the correctness of the original paper.

Declaration of competing interests
All authors should disclose in their manuscript any financial and personal relationships with other people or organizations that could be viewed as inappropriately influencing (bias) their work. All sources of financial support for the conduct of the research and/or preparation of the article should be disclosed, as should the role of the sponsor(s), if any, in study design; in the collection, analysis and interpretation of data; in the writing of the report; and in the decision to submit the article for publication. If the funding source(s) had no such involvement then this should be stated.

Image integrity
It is not acceptable to enhance, obscure, move, remove, or introduce a specific feature within an image. Adjustments of brightness, contrast, or color balance are acceptable if and as long as they do not obscure or eliminate any information present in the original. Manipulating images for improved clarity is accepted, but manipulation for other purposes could be seen as scientific ethical abuse and will be dealt with accordingly. Authors should comply with any specific policy for graphical images applied by the relevant journal, e.g. providing the original images as supplementary material with the article, or depositing these in a suitable repository.

Contribution to Editorial Decisions
Peer review assists the editor in making editorial decisions and through the editorial communications with the author may also assist the author in improving the paper.

Promptness
Any selected referee who feels unqualified to review the research reported in a manuscript or knows that its prompt review will be impossible should notify the editor and excuse himself from the review process.

Confidentiality
Any manuscripts received for review must be treated as confidential documents. They must not be shown to or discussed with others except as authorized by the editor.

Standards of Objectivity
Reviews should be conducted objectively. Personal criticism of the author is inappropriate. Referees should express their views clearly with supporting arguments.

Acknowledgment of sources
Reviewers should identify relevant published work that has not been cited by the authors. Any statement that an observation, derivation, or argument had been previously reported should be accompanied by the relevant citation. A reviewer should also call to the editor's attention any substantial similarity or overlap between the manuscript under consideration and any other published paper of which they have personal knowledge.

Disclosure and Conflict of Interest
Privileged information or ideas obtained through peer review must be kept confidential and not used for personal advantage. Reviewers should not consider manuscripts in which they have conflicts of interest resulting from competitive, collaborative, or other relationships or connections with any of the authors, companies, or institutions connected to the papers.

Research misconduct means fabrication, falsification, citation manipulation, or plagiarism in producing, performing, reviewing research, and writing an article by authors, or reporting research results. When authors are found to have been involved with research misconduct or other serious irregularities involving articles that have been published in scientific journals, Editors have a responsibility to ensure the accuracy and integrity of the scientific record.

In cases of suspected misconduct, the Editors and Editorial Board will use the best practices of COPE to assist them to resolve the complaint and address the misconduct fairly. This will include an investigation of the allegation by the Editors. A submitted manuscript that is found to contain such misconduct will be rejected. In cases where a published paper contains such misconduct, a retraction can be published and linked to the original article.

Suppose scientific misconduct or the presence of other substantial research irregularities is a possibility. In that case, the allegations are shared with the corresponding author, who requested to provide a detailed response on behalf of all of the co-authors. After the response is received and evaluated, additional review and involvement of experts (such as statistical reviewers) may be obtained. For cases in which it is unlikely that misconduct has occurred, clarifications, additional analyses, or both, published as letters to the editor, and often including a correction notice and correction to the published article are sufficient.

Institutions are expected to conduct an appropriate and thorough investigation of allegations of scientific misconduct. Ultimately, authors, journals, and institutions have an essential obligation to ensure the accuracy of the scientific record. By responding appropriately to concerns about scientific misconduct and taking necessary actions based on evaluating these concerns, such as corrections, retractions with replacement, and retractions, AL-BALAGH: JURNAL DAKWAH DAN KOMUNIKASI will continue to fulfill its responsibilities ensuring the validity and integrity of the scientific record. 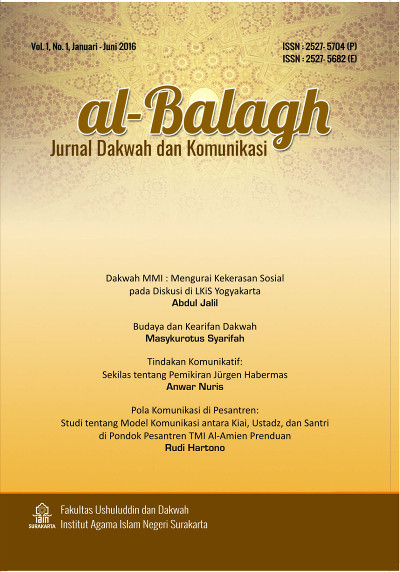